Meandering through the realms of ambient, soundscape, lo-fi and experimental music, »EP02« by Orion Moustache was produced using a guitar and guitar effects only. Despite the minimalistic setup, he tries to explore all its possibilities in his attempt to move away from the traditional guitar sound.

Orion Moustache about his production: »I used a four-track cassette recorder which added some beautiful tape hiss and artefacts. I enjoy such kind of random and unplanned sounds resulting from the interaction with technology when creating music. After the tape’s digitization, my friend Gen Seiichi made a subtle mastering. The cover picture was taken by myself in Japan in the mountains of Gunma prefecture.«

Berlin-based Lasse Müller aka Orion Moustache likes to draw inspiration from various musical styles and musicians. For »EP02« names like Bill Frisell and Basic Channel are important reference points. He is also a member of the dream-pop trio Burnout, Bianca and enjoys creating beats in a beat cypher group. 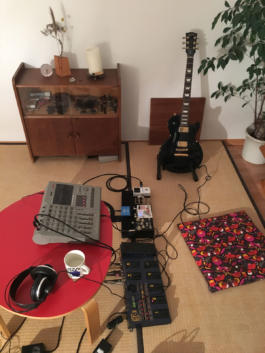 »The rhythmic ostinato of this track creates a base for the spacious delay sounds that evolve and change throughout the track. As the delay figures on top are not quantized, ›out of the grid‹ rhythms give an organic feel to the track. This tune was recorded at a faster speed but when pitched down with the pitch wheel of the Tascam four-track recorder it sounded more natural and fitting to me.«

»Based on a rather short loop that I recorded I used the pitch wheel of the Tascam to randomly add tape slurs and the slowing down effect at the end of the track. I found the loop intriguing because it is somehow difficult to grasp the starting and endpoint of it. Combined with the small changes from the pitch wheel it continuously keeps my interest.«

»Starting with a heavily hissing ping pong effect the sounds slowly gravitate towards the centre. In the beginning, low frequencies are omitted to give the track a floating feeling. The continuously repeated arpeggio becomes a clear shape in the midsection just to dissolve in reverb and distortion towards the end.«

»An underlying pulse that moves back and forth gives this track a forward-moving motion. Additionally, harsh-sounding distorted elements are creating energetic bursts that dissolve in ambience. Fun fact: for this track, I recorded several takes until it sounded right to me. After I had finished the best take, I heard some weird singing at the very end of the track. It turned out that I didn't erase both sides of the tape properly before starting the recording. I had bought the tapes on a well-known bidding internet platform, and now the spirit of the former owner is somehow included in this track...«

Orion Moustache on »Rhythmic Dub I« 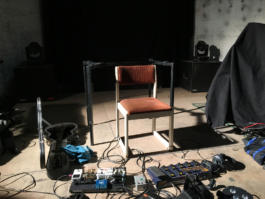